The Insteon SmartLinc had less functionality than I had expected. Even though you can control your devices from a web page, it still seems pretty locked down. Devices have to be "linked" into the controller in order for you to control them. I was hoping that you would only have to know the Insteon ID of the device to turn it on or off. The final straw was the fact that I couldn't retrieve the state of a device from the SmartLinc. I asked the professional people at SmartHome and they told me that I could:

set up an IP camera to see the status of my lights...

WOW. Obtaining the status of your devices is one of the main features of the Insteon platform. How could they have left this out? So, sadly enough, I had to request an RMA# and have shipped it back! 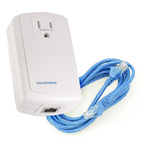 There's a new Insteon controller out there that uses a built-in web server to control your Insteon devices. It's called NetLinc and has a price tag of $119.99 from SmartHome (of coarse). I believe that this is going to be one of SmartHome's biggest Insteon products yet. In the past, Insteon controllers have been pretty locked down as far as user manipulation is concerned. With an HTTP controlled device such as this one, there isn't going to be anything to hide. I can already see the numerous custom interfaces being made for any device that has a web browser. This will also open a new market for custom floor plans that can be developed using common web design techniques (GET or POST requests). For a more complex interface, you might be able send XHR(AJAX) requests to the NetLinc to turn on, off, or check the status/state of a device!

SimpleHomeNet has already manufactured a few products that aimed to achieve the same functionality as the NetLinc. They are all quite a bit more expensive though:
EZSrve Insteon/X10 Home Automation Gateway ($209.99)

I'll be ordering my NetLinc soon and can envision my Insteon USB PowerLinc on EBay shortly after!

Switching From X10 to Insteon

I've always been interested in electronics and imagineering what electronics could/can do for me. A few years ago started reading about X10 for home automation. It was (and still is) relatively inexpensive. After I figured out what I needed, I started purchasing module after module. At first, everything appeared to be working as expected, but after a while, an outdoor light would remain on all day long or when it got dark outside, a group of lights would not have gotten turned on. This was happening at least once a week. I wasn't discouraged yet. I began experimenting with transmitter placement, in relation to different circuits and the surge suppressors that were on them. This would only move the problem around. There wasn't one location that would solve all of my problems. I still had hope. SmartHome sells an X10 phase coupler/signal repeater that plugs into your dryer outlet (no wiring required). We happen to have an electric dryer (you can tell by looking at our electric bill), so I ordered one up and couldn't wait for my problems to go away. My problem solver only cost me $90(insert sarcasm here)! Ok...ok, I'll have to admit that it did help. It was just before Christmas when I received it. I had our tree and all of our outdoor Christmas lights connected to X10 modules. The lights on one side of the house wouldn't work until I plugged in the repeater......that's all it fixed. I still had intermittent problems. One day it would all work fine and then the next it wouldn't.

I began doing more research with hopes of finding a better solution. This research lead me to Insteon. I had invested a few hundred dollars into X10, and Insteon would still be able to support the mediocre protocol. Insteon costs more than X10 and is definitely not as "open" either. I was running my X10 transmitter using a Linux box with a combination of Heyu and BlueLava. These packages are both open source and they worked great together! If I were to switch out my X10 transmitter with an Insteon one, I wouldn't have the same freedom. SmartHome has a basic software application that allows you to set up and control the Insteon USB - PowerLinc. Its use is limited to the Windows PC that's physically connected to the PowerLinc (USB cable) though. If you want anything more than that, you have to purchase more software. I decided to go for it. I purchased one of the starter kits and the USB - PowerLinc. My plan was to run the two systems(existing X10 and new Insteon) side-by-side until I got the PowerLinc figured out. The PowerLinc has the ability to store timer functions. I set it up to operate the outdoor lights on a sunrise/sunset schedule. I had also replaced the switches for those lights to Insteon switches. My starter kit came with the wireless SignaLinc RF Signal Extenders. The idea behind these is to couple the Insteon signal from one phase to the other, wirelessly. This new setup worked great. I haven't noticed one missed signal from Insteon to Insteon. Each device is also a repeater(unlike X10), so the more you have, the more solid your system is going to be!

The Insteon devices are a little pricey and there isn't as wide of a selection of them out there as there is X10. I really wish they would open up their USB/Serial signal protocol. You can purchase an Insteon software development kit for $199, last I checked. I've heard that this doesn't give as much information as one would like (only a rumor though). If you're running in a strictly Windows environment and don't mind purchasing some extra software, Insteon is probably worth it. If not, the developers of the Linux MCE are supposedly working on supporting Insteon. This could be what we need to take full advantage of the stable (so far) devices. For now, it'll just be hacking away with Windows and USBSnoop to run the transmitter from my Ubuntu (Linux) server!